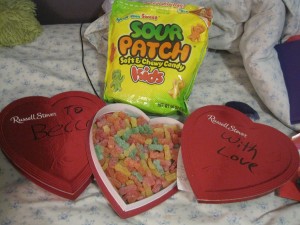 I am not a big football fan. In fact, I know very little about the game besides the fact that you get points for scoring a touchdown. Apparently though, everyone around me is obsessed with football. The SuperBowl was last night, and needless to say I didn’t watch it. Though, I did later look up Kelly Clarkson’s performance of the national anthem, because I adore her and think she’s amazing. :love:

It’s kind of funny because everyone keeps asking me if I watched the SuperBowl last night. I just kind of laugh and tell them no and then they seem all disappointed that they can’t discuss the game with me. I mean, I guess they could, but there really wouldn’t be much of a response on my side. And then they proceed to ask me what my favorite commercial was. Which makes me laugh again, because I’m not going to suffer through half of a football game just to watch commercials. Silly people. I’ll youtube them later.

I mentioned a couple posts ago that I was taking a Web Design class and so far I’ve been kind of disappointed. It’s not exactly what I thought it would be. All we mainly do is familiarize ourselves with Dreamweaver, a program that does all the coding for you, and we have to complete small assignments like:

So not exactly building a layout or anything. I often find times where I have nothing to do because I’ve already completed all my work and the teacher is just waiting for everyone to catch up. I’m actually writing this blog post during this class.

But, I am learning some things that I didn’t know before and I’m becoming a lot more familiar with CSS, which is nice. That is one of my goals on my 101 in 1001 list, which I haven’t been really keeping up with much.

I’ve received a few comments recently remarking about me completing NaNo and editing my novels, etc. I’m currently working on two; one I am editing and the other I am still writing. However, I’m not sure I plan on publishing either of them. NaNo offered all winners five free copies of their novel through CreateSpace and you can publish it through there. I’d like to do that – I mean being able to hold in my hands a paperback novel that I wrote would be simply amazing – but the whole selling it to the public thing, I’m not so sure about. I was just talking to Kris about how I’m really self-conscious of my writing (ironic enough because I own a blog) so knowing that the entire public had access to my novel, makes me a bit nervous. Soooo, thinking all that over still. What do you guys think?

My NaNo novel is called Murky Waters, and in short, it’s an adventurous story about a young barmaid and pirates. During NaNo, when I was writing it, I thoughit it was the worst thing ever. But after going back and editing it, I’ve become really proud of it – especially since it’s my first completed novel. There are some parts where I’ve laughed aloud at something I wrote – and that’s one of the greatest feelings, knowing that you wrote something really good.

My other novel, that I am currently writing, I have no plans to share it at all. I started it in 2007, so when I was in the seventh grade (!!!) and I just want to finish it for the pleasure of finishing a novel. It’s pretty bad, but I enjoy writing so this is more of a project just to keep me writing and my creative juices flowing. Plus, it’s keeping up with my new year’s goal to keep writing.