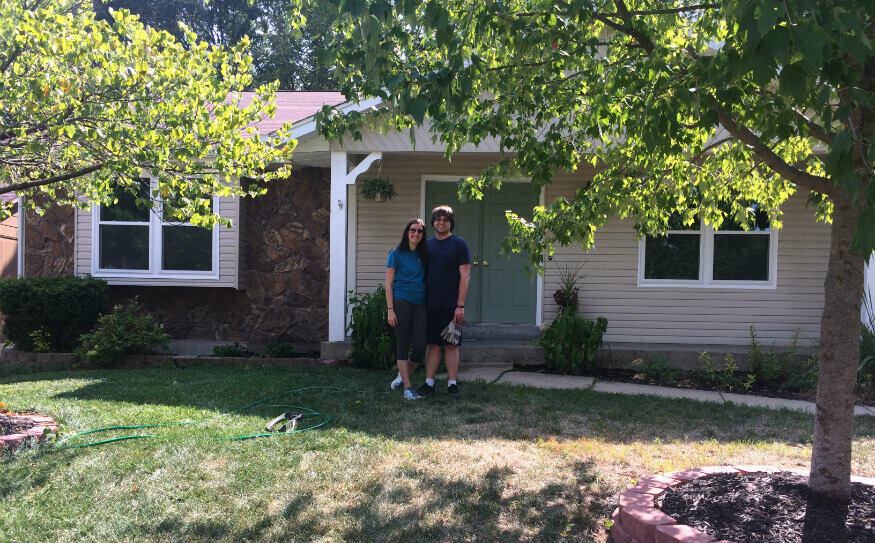 Back in August, Andrew and I bought our first house. We were previously renting a house from my mother-in-law, but it was a small space and I couldn’t make any changes to the house since we were renting. It didn’t feel like home; it felt like we were living in someone else’s house. That being said, I am very thankful for the opportunity we had to stay there because we weren’t in a rush to find someplace to live when we moved back from college and we were able to save a good amount of money for a down payment!

We spent about three months house hunting across the St. Louis area. Our search initially started in South City, which is a vibrant area with tons of restaurants and bars and would have been less than a ten minute commute for the both of us. The market for that area however was so competitive. Houses that were listed for sale would sell the same day for over asking price. The houses and yards were also significantly smaller for the price you paid since you were living in the city.

I was pretty discouraged. We had put an offer on a house but the sellers passed on it as they has received another offer over list price. Plus, looking for a house is absolutely exhausting! I had sent our realtor a list of about ten houses fresh on the market that we wanted to look at but they all had major issues, so she suggested looking at some houses aross the river and to the west of St. Louis county.

We gave it a go – and I really wasn’t expecting much – but the minute Andrew walked into our house, he loved it. He could instantly envision where we would put things, all the room Chloe would have to play in, the fact that it was a bigger house, so in the future if we had children, we wouldn’t outgrow it right away.

Honestly, I wasn’t sold right away. I liked the space and the layout of the house, however it was pretty dated. But as I started pointing things out, I also started to talk about the things I would change if it were my house. And suddenly the dark , enclosed kitchen and dining room started to turn into an open, bright area once I took the wall separating the two down in my head. And I would take down the chair rail and put a bright coat of paint on the walls. I’d take out the old gross linoleum floor in the kitchen and put in new flooring that made the dining, living, and kitchen all match.

Then I started to do that with the rest of the house. I liked the bones of the house and it seemed to check most of the must-haves from our list. We wanted a house that had at least two bedrooms and two bathrooms, and this had three bedrooms and three bathrooms. We wanted a good sized yard for our dog and this had a decent yard with plenty of shade, as well as a deck. The basement was partially finished, which wasn’t a must have, but definitely a bonus! And, it was less than a 45 minute commute to work, which was a must.

By the time we were done walking through it and really looking it over, we knew we had a big decision to make. We went home and talked about it, going over our budget (it came under!) and the location, and really hashed it out. Andrew wanted it and I really liked the idea of being able to fix it up so that it was exactly what we wanted – and so that it felt like our home. We decided to put in an offer.

I called our real estate agent and she gave us a range that she thought would be an acceptable offer. It has been on the market for four weeks, which in the area we were looking was a good amount of time to not have sold yet. We agreed on a price a bit under asking and she sent over the paperwork and we signed. Then we had to wait, which was absolutely painstaking.

The sellers countered the next day a bit more than we initially offered, but still under asking. I was still nervous – I mean it’s not every day you agree to buy something that’s thousands and thousands of dollars! Andrew went through our checklist with me again, making sure to point out that this house checked off most of the things on the list while still falling within our budget.

Looking back, he was so patient with me.

In the end, I was so nervous I couldn’t make the phone call back to our real estate agent to accept the offer, so Andrew did it for us.

Everything after that was a bit of a whirlwind. We initially went with a lender that our real estate agent recommended and he turned out to be real shady. He was kind of pushy and gave us a terrible interest rate, so we pulled out at the last second and went with a different lender a friend recommended who gave us a great rate and was super accommodating.

Our inspection turned up some small things that needed to be fixed, which was to be expected, and the sellers agreed to fix most of them which was nice. The driveway was a bit beat up, so they gave us a credit for that as well. The electric and plumbing were all up to code so there were no worries there. Other than the lender hiccup, everything else went pretty smooth.

Closing went pretty fast. Andrew and I both took the full day off work and I expected to take all morning, but only took about an hour. It was a pretty sweet feeling when they finally handed us the keys! We didn’t move in right away since we were doing so much work to the house that it didn’t make sense to live in the construction when we had no deadline to leave our old house.

We’ve been living in our house for about five months now and it truly feels like home. There is still a long list of things we want to do to the house and still (eek, I’m embarrassed to say!) some painting that needs to be done, but once we’ve got some of the smaller things finished, I will feel more comfortable sharing. If it’s one thing I’ve learned, owning a house is a lot of work, but it is also a lot of fun.

7 thoughts on “We Bought a House!”