June 9th, 2011:
After about an eight hour plane ride from Newark, we arrived at the Charles de Gaulle Airport in Paris at about 8:00 am. I didn’t get hardly any sleep on the plane, so I was already feeling pretty tired, but we had a full day planned ahead of us. We were running a little late though; our tour guide, Paolo, had a delayed flight, but once he arrived about half an hour later, we loaded the bus and headed to the hotel.

Our hotel was located in a little square with a post office and a bunch of little boulangeries and patisseries. It was really cute. ^^ We were on our own for lunch, so we stopped into a little shop that sold some sandwiches and other little light snacks. It was my first opportunity to talk to a native French person (I thought it did pretty well! :)) and it was also the first time I tried French bread. :* Let me tell you, I never want to eat American bread again.

Our whole group then headed to the metro, which was just down the street and around the corner, and headed to Notre Dame Cathedral. It was absolutely beautiful. 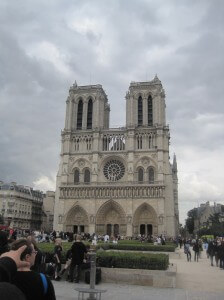 For a small fee, you could climb to the top of the Cathedral and look out over the square, and ultimately Paris. It was pretty funny because as our teacher, Madame Scott, went to pay for tickets, they thought she was French and that we were French students, so we got a huge discount!

We then began the trek up the 402 steps to the top. It was a winding staircase and I started to get dizzy, but it was totally worth it! 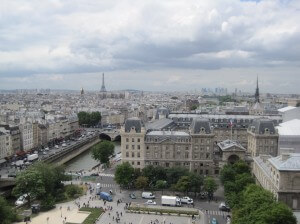 There were also tons of gargoyles that you could see up close; I though they were pretty cool so I took a bunch of pictures of those, too. 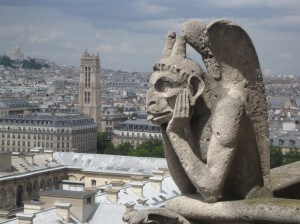 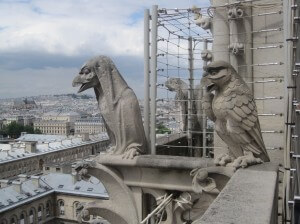 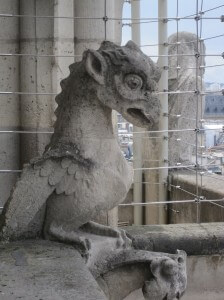 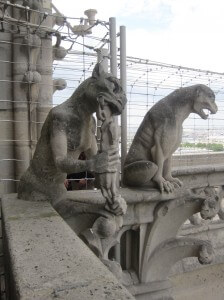 Everyone’s legs were shaking after the climb back down.

After that, it was shopping time! I loved going into all the stores, even if they were just souvenir stores, and seeing all the different stuff they had. I didn’t really buy a lot the first day because I wanted to make sure I had enough for things I wanted later on in the trip, but I bought a Paris hoodie, and two miniature Eiffel Towers, one for me and one for one of my aunts.

By this time, me and Becky were on our own and away from the other group and we just kept saying over and over, “We’re in Paris!!” It was like we were in a dream; we just couldn’t believe it was actually happening! We just continued walking around and started drifting into the streets that weren’t very tourist-y, and was more like what Paris was like for someone that actually lived there.

Our whole group met up again at our meeting point and we headed off to dinner. I don’t exactly remember the name of the restaurant (I think it might’ve been ‘Hippo’, which is what I wrote down in my journal, but I don’t think that’s right…) and they served us Ratatouille and quiche. 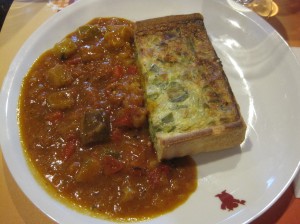 Uh… Yeah… This was probably one of the only dinners that I didn’t like on the trip. Though I didn’t like it, I still liked the fact that it was an authentic French meal and it was something new to try. I didn’t want to come to France and not eat French food. That’d be lame.

I was so exhausted by the time that we had gotten back to the hotel. We threw our luggage into the room, and I organized my things a little bit because I’m a freak, but then I just crashed. It was a good first day. 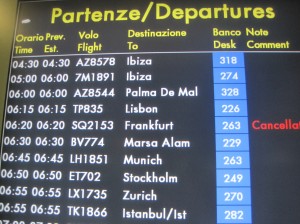