Some of our close friends recently returned from Puerto Rico for the holiday. They went on a three week trip so I have missed seeing them! I wanted to get everyone together so we could talk about their trip – and I still had some Christmas presents to give out! I’m always very impatient for people to open presents that I give them.

Giving is definitely better than receiving!

I was trying to come up with some dinner ideas that everyone would like as two of our friends are vegetarians. Andrew and I 99% of the time eat meat with our dinner because he hates everything that even looks like a vegetable.

I suggested chili. It’s very filling and it would be easy for me to make half of it without meat. But then I thought some more and said aloud, “Though, anyone can make chili.” He replied, “No one makes chili like you do.” Deadpan, serious face.

I couldn’t help but laugh. I don’t feel like I make amazing chili, but I do think it’s pretty good, if I say so myself.

My recipe has slowly evolved over time. I started with my mom’s recipe, but found it too bland (I like mine spicy!) so I took some pieces of other recipes and added in a few ingredients of my own.

What I like about this recipe is that it is really easy, and doesn’t take very long to prepare. To make it vegetarian, obviously leave out the meat. 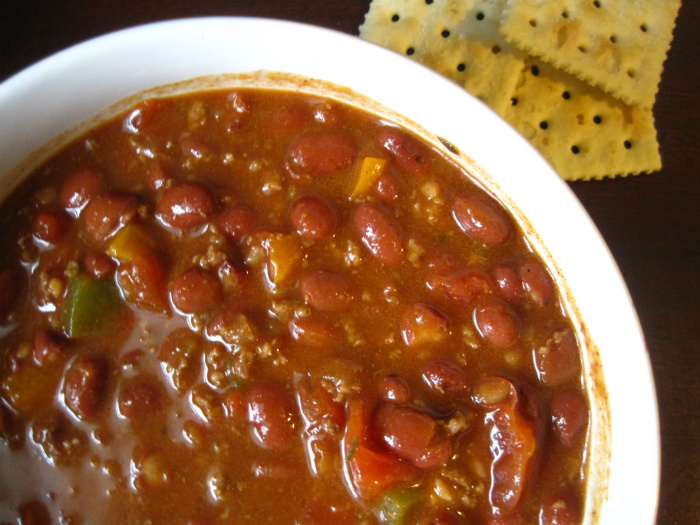 Start by browning the beef with the onions and peppers. You can use the whole pepper if you prefer, but I think half of each pepper is a good ratio. (I always freeze the remaining to use later!) When cooked, drain the meat and add in the chili beans. Add in the can of Rotel, undrained. Add in the tomatoes — either the one can of diced tomatoes or the fresh tomatoes. I try to do fresh, but sometimes I forget to pick some up at the store so I use the can.

I then fill each can (the four chili cans the Rotel can) about halfway with water and dump into the pot. This gets all the extra juice out of the cans. However if you like your chili thicker, add less water. If you like it thinner, add more.

I add a dash of chili powder and a dash of crushed red peppers to make it a little more spicy. The can of Rotel already gives it a bit of a kick, so this gives it a bit more. If you don’t like spicy foods, then skip these seasonings. It tastes fine without. You may want to add more if it’s not spicier. Always taste.

Stir everything together real good and let it cook for about ten to fifteen minutes. Or until you can’t wait any longer to eat it because it smells so good. That usually is what we do, haha! 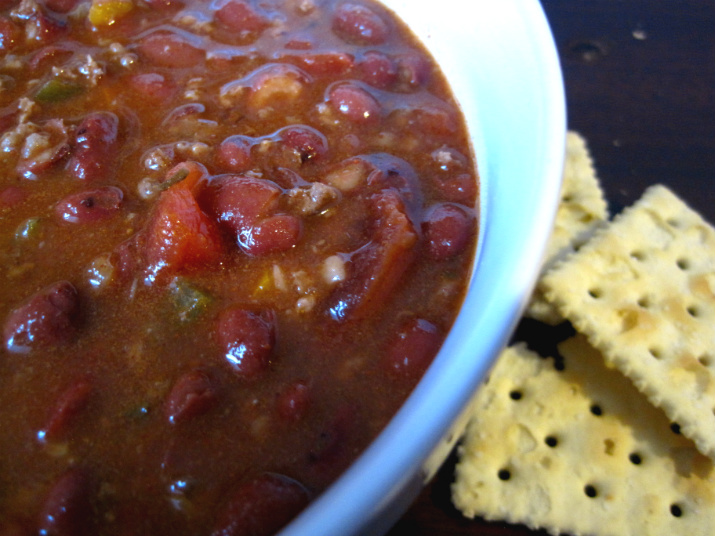 I always serve chili with corn chips, crackers, and cheese. Andrew is weird and likes to add salsa. Sometimes I like to add hotdogs to my chili, but maybe I’m the weird one.

Chili is perfect for chilly winter days cozied up with friends!

Since marrying Andrew, I have been introduced to the gaming world. Andrew has slowly been convincing me to try different games, and I must admit, it’s been fun. I would never have considered myself a “gamer” before, and I’m not really sure if I consider myself one now, but I am much more open to the idea. So I want to introduce you to a new series I’m starting about my adventures playing video games!

Before, I had only completely finished one video game- Harvest Moon: Back to Nature, and that was waaaay back in middle school. For my first post, I want to share a few games that I have been playing recently (and even beat 100%!).

LEGO The Hobbit
I love the Lord of the Rings – the books, the movies, and now this video game. Andrew invited me to play a level with him a couple months ago and I had so much fun smashing all the LEGO pieces and earning all the nuggets (okay, maybe they aren’t called nuggets, but it sounds better than studs)! I wanted to play the next day when Andrew wasn’t home, so I started it up and decided to just make a new game and play on my own.

I loved the cut scenes, which were essentially scenes from the movie lego-fied, and added with the trademark LEGO humor. I really enjoyed all of the side quests and they proved to be both entertaining and humorous. Some of them proved quite challenging and took me longer than I’d want to admit to try and complete them. I found the Rivendell scenes especially hard as you had to run all over the buildings and in hard to maneuver locations.

It was a good mix of everything – not too easy to be boring, but not too challenging to be frustrating. A fun take on the movie that proved immensely entertaining and makes me a little sad when I beat it because it was over. But I beat my second game so it was quite a momentous occasion.

I even snapped a picture and texted it to Andrew and my brother, who were both quite shocked!

The LEGO Movie
I thought that the LEGO movie was a hilarious and brilliant film that definitely got snubbed in the lack of awards it received. Since I had really enjoyed the LEGO Hobbit, I thought it would be worth a try. I didn’t find this game as enjoyable as the Hobbit, and it seemed rather unfinished to me, like it was still in a rough draft state.

This game proved rather glitchy, however, which was really frustrating. I would be near the end of a level and the game would glitch, requiring me to completely start over and lose all my progress. My characters would get stuck, I would complete the mission but couldn’t advance, etc. There were many times I would just quit the game for a while because I would be so frustrated! However, The Hobbit was also rather glitchy, so I think that it’s something the LEGO video game franchise could definitely improve upon.

Overall, enjoyable, but could use improvement. Here’s to my third completed video game!

Just Dance 2014
Oh yes, my friends. There are some days where I just want to dance and this game is so perfect for that. I’m only slightly embarrassed about how much I love this game. It’s absolutely hilarious playing with Andrew – we are the perfect definition of horrible white people dancing. Some of the moves require two people. There was one particular song where Andrew had to dip me and continue walking, but I just ended up toppling to the floor. We couldn’t finish the song because I was laughing so hard.

I’m not sure if I’ll ever beat it 100% because some of those songs are hard! But it’s definitely entertaining and quite a good workout! There are some days that my arms are sore afterwards because of all the pumping and fast movements!

It’s been fun playing all these new games so far, and if you have any suggestions for a beginner, let me know!