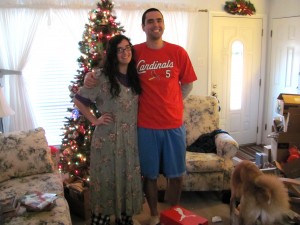 The last two weeks have been absolutely crazy. I’ve never done so much studying for school in my life! Finals week is hell for anyone, and taking six honors classes has definitely taken its toll on me. I feel tired, literally exhausted even though I took a four hour nap after I got home from school, but I’m happy. I managed 100% on both my Calculus final and on my research paper for my Writing Workshop class. I’m waiting still on one class, but I’m positive I’ve got straight A’s this semester–finishing my second to last semester of high school with about a 4.8 GPA!

Today was my last day of school and I’m just so relieved. I’m so sick and tired of school; I really don’t think I could’ve lasted another day. I only get a week and a half off, but I’m so thankful for this break. I’m just so mentally exhausted. Both from school work, from not having time to myself or for friends/family, from all the stupid idiots that seem to surround me at my school. I’m just so happy to be off.

My mom had her shoulder surgery today. My dad took her around noon to the hospital and I’m not sure what time they got back home. I had a bit of a date night with Andrew to celebrate the end of first semester and we went to Applebee’s and then to see Sherlock Holmes (which was amazing, btw). My dad texted me during dinner saying that the surgery went well which I was relieved for.

My grandpa called shortly after because he hadn’t heard anything and had been trying to call the house but no one was answering (since my brothers apparently don’t know how to answer a phone). He was really worried about her–he won’t admit it, but my mom is definitely his favorite.

She’s doing alright, I guess. She’s feeling extremely nauseous at the moment and can’t really do much but just sit in our lazy chair in the living room. Me and my sister and dad have been trying to just make idle conversation and just make her as comfortable as possible. I don’t think she’s in a lot of pain, I think she just feels sick. I wish there was something that we could do to make her feel a little better.