Growing up, my family didn’t really watch a whole lot of movies. My dad would occasionally take us to the theater to see the new, big action flick and I distinctly remember him taking me to see Princess Diaries (what a good dad), but other than the Disney movies and the ones we begged him to take us to see, we didn’t go much.

This is for several reasons, really. My mom doesn’t like movies – she only enjoys seeing very clean, “family-friendly” movies, and even then she’s really just not interested. Another reason is that we didn’t have a whole lot of money, and with a family of six people, going to the movies was expensive even on an early Saturday morning. It just wasn’t in the budget.

Andrew on the other hand, watched movies all the time with his mom growing up. We were recently talking about all of the movies that were considered “classics” or the “best of all time” that we (and by we I mean mostly me) have never seen. We both enjoy watching movies, and there were so many movies we wanted to watch that we just never have. So we thought it would be a fun challenge to watch all of these culturally classic movies by consulted the IMDB Top 250 Movies list.

If you’re not familiar, IMDB (Internet Movie Database) is a website which does exactly what its name suggests. Users can also rate movies, and I’m not sure what their exact algorithm is but IMDB puts together a list of the top movies of all time. We picked the top 250 list.

We saved a copy of the list to Excel and dated it, that way if any movies were taken off the list or added to it, it wouldn’t set us back. Our goal is to watch all 250 movies. We haven’t given ourselves a time limit – that is a lot of movies and if we watched a movie a week, it would take at least four years (we’ve crossed off movies we both have already seen). Some weeks we may watch three or four movies, and then there may be two weeks where we don’t watch any. We want to have fun with it and not make it a chore, so by not setting ourselves a “to be done by” date, I think we will really enjoy it.

Before we started the challenge, we had both seen about 45 of the movies on the list. If one of us had seen it, but the other hadn’t, we didn’t count it. We both have to have seen the movie to cross it off.

We’re still establishing rules – and by that I mean arguing about the rules. I think that we should each be allowed at least two vetos. 250 movies is, again, a lot of movies, and I can think of several that I have no desire of watching. I don’t like a lot of vulgarity so I know that I will absolutely hate The Wolf of Wall Street, however much I do love Leonardo DiCaprio. I think I should be able to use a veto. Andrew believes that we have to watch every single movie, otherwise when we say “We watched all 250 IMDB top movies!” we also have to provide a disclaimer that we skipped a few. I know of a few that Andrew really doesn’t want to watch, so I’m hoping I can persuade him that we don’t have to watch them if he uses a veto.

What do you think? Should we be able to skip a few movies, or should we watch every single one so that we can truly say we watched the IMDB Top 250?

We flew into Puerta Plata about 2:30 in the afternoon on a dirt airstrip. As we made our way towards customs, there was a band playing music that Andrew kept calling a Mariachi band. The resort we were staying at is about a three and a half hour drive from the airport, so we arranged for a transport service beforehand to meet us there. I was a little nervous that there would be some miscommunication because of the flight delays, but when we walked outside of the airport, there was our driver holding a sign with Andrew’s name on it.

We loaded all our things in the van and were on our way. Our driver was so nice (if not a bit of a crazy driver – I thought we were going to crash several times) and would point out interesting things to us. It helped that Andrew knew Spanish when something didn’t translate right. The countryside was very beautiful, but it was very evident just how poor the country is. 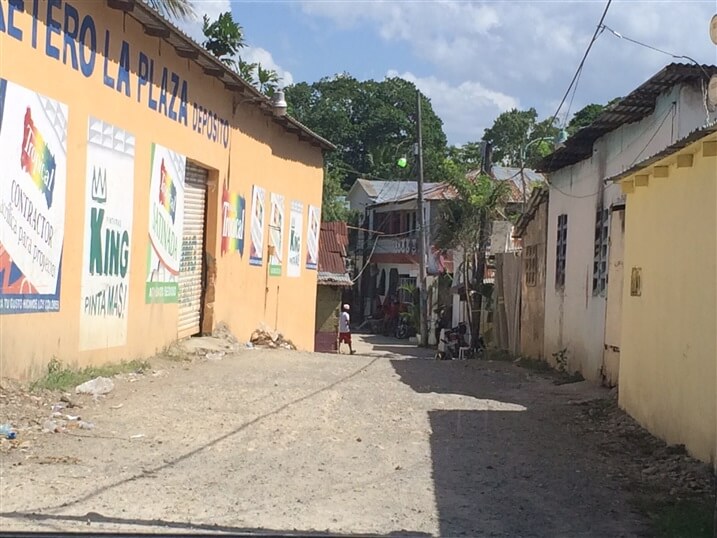 About halfway there, our driver stopped and bought us some waters, cheese, and crackers from a local farmer. The cheese wasn’t bad, it just had a texture I’ve never experienced before. It was really juicy, which is a term I don’t normally use for cheese, haha. Here is a bad picture of me and said cheese: 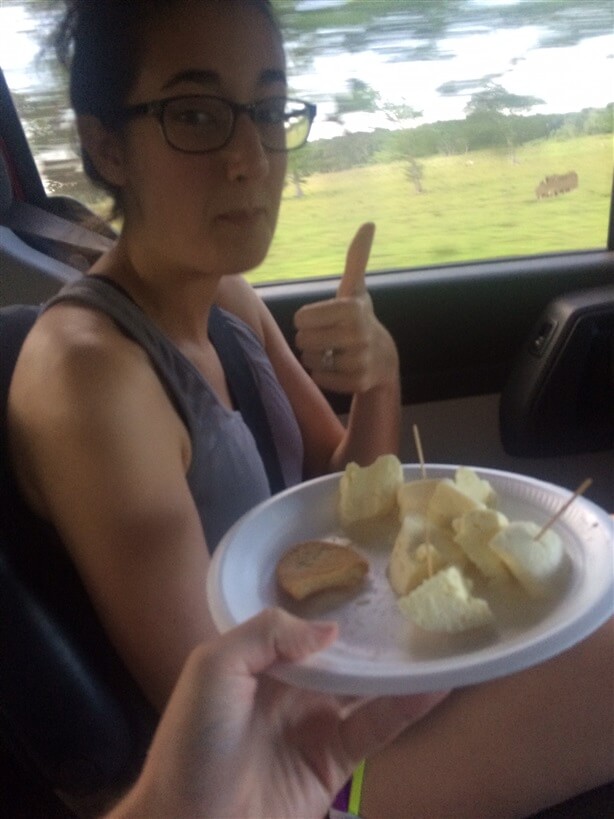 It was a long drive and it was neat to see the less “touristy” areas , but I was so glad when we finally got to the resort. We checked in and there was a golf cart waiting for us to carry us and our luggage to our room. The resort was built on a big hill, so everything was up and down stairs – or you could call for someone to come pick you up on the golf cart, but we just usually enjoyed the exercise.

Our room was huge! The bed felt bigger than a king-sized and the view from our balcony was amazing. Everything was so green and lush and pretty. We always kept the blinds open so we could see the bay. There were several different pools, but we usually lounged by the one by the bay because it usually wasn’t very busy and there was a snack/bar. The Bahama Mamas were my favorite drink. 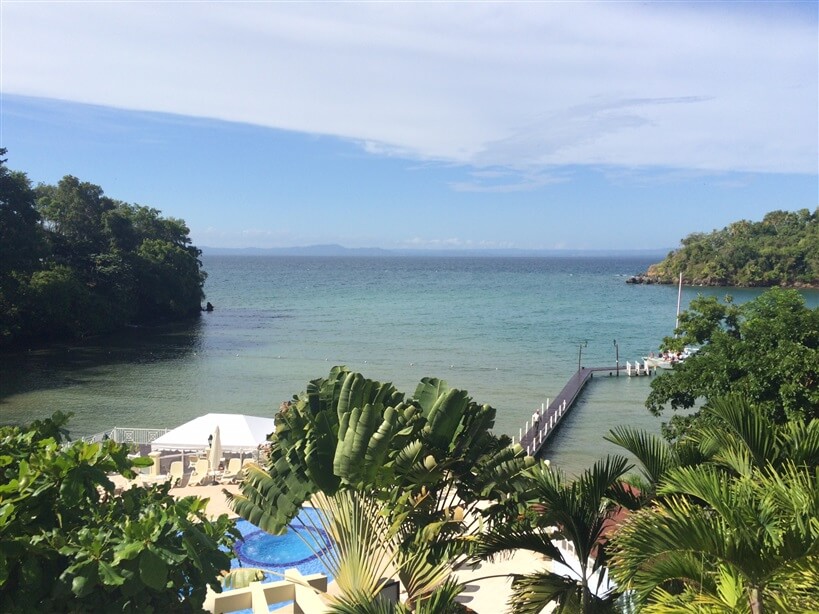 We visited the beach twice, but it was always a bit crowded and Andrew felt like he got more sunburnt down there. ;P They had a great snack bar as well with nachos, chicken legs, hot dogs and hamburgers and then a variety of fruits. We ate (and drank) so much that week.

They had a buffet and the food was a little mediocre. They had a huge bread bar which I really wish I would have taken a picture of; they had breads in the shapes of flowers and real long sticks. They had every shape and variety and I love bread! Haha

They also had some nicer restaurants where you were required to make reservations. We tried the French restaurant first and it was kind of “meh.” But it was fun to dress up – and I take any chance that I can to make Andrew dress up since he lives in shorts and a t-shirt. The restaurant was up by the main office, which we weren’t really around that often, but offered such a gorgeous view of Samana at night! So the food was eh, but the view was totally worth it! 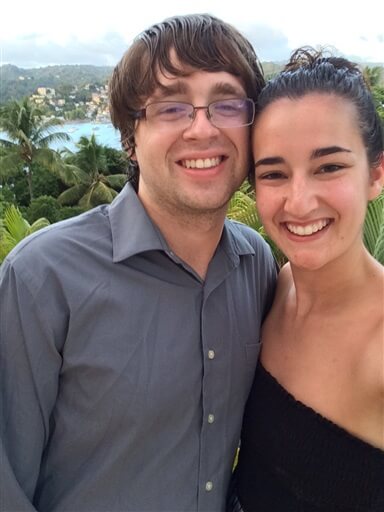 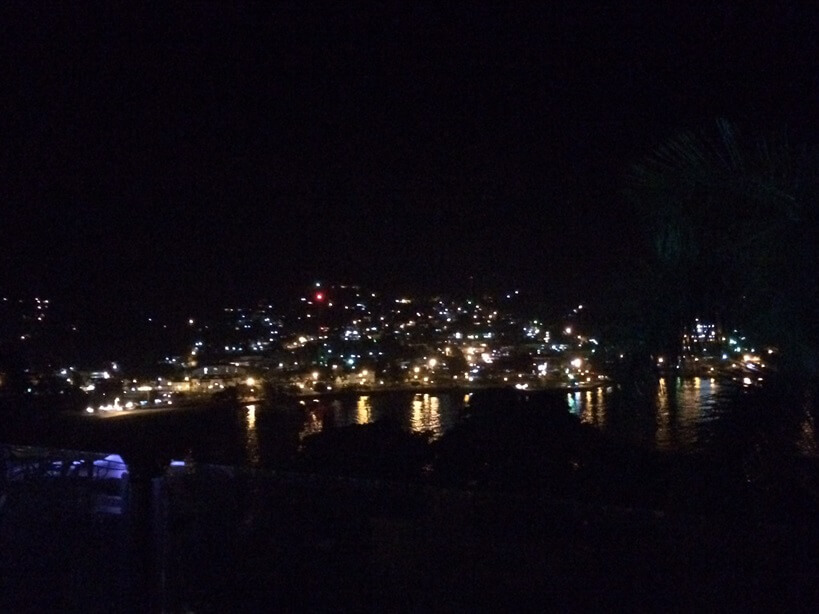 We cancelled our other two reservations because a) we were either lazy and didn’t feel like changing out of our swimsuits and showering and b) I had a little too much to drink one day. :? We really spent most of the week relaxing. After a stressful summer, we really just enjoyed reading by the pool and napping on the beach. The beach really was pretty cool and for some reason this is the only picture I snapped of it. I guess I just thought it was so cool I was laying under a thatched hut umbrella thing. That’s what they’re called, right? 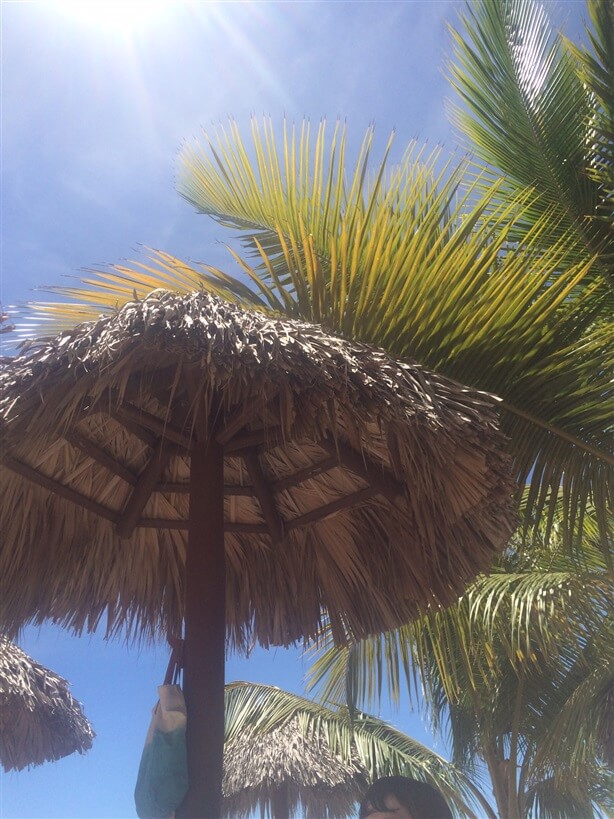 Andrew was approached by a scuba instructor and persuaded me to take a scuba class with him. I was a little unsure, but it was actually a lot of fun once I was accustomed to all of the gear, breathing underwater, and hand signals.On Friday morning, we met on the beach to take this sketchy looking boat out to another island. 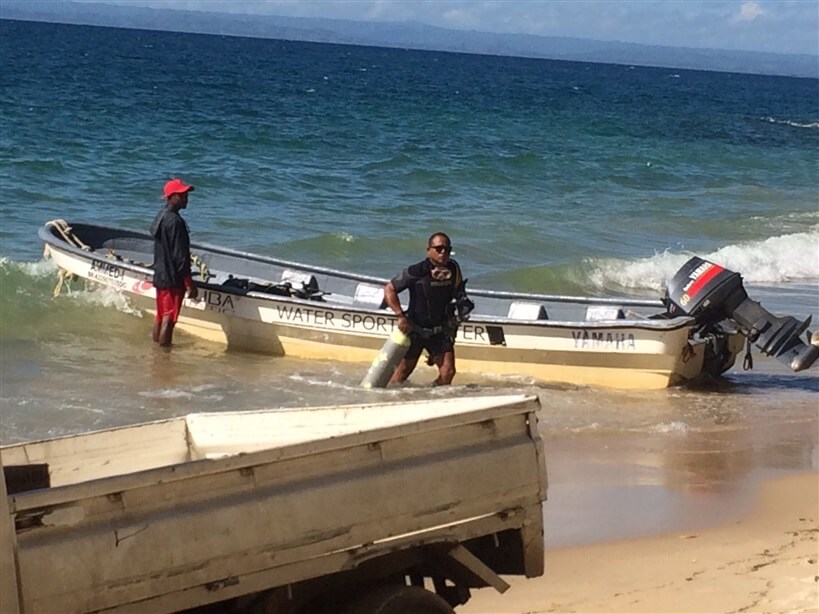 We met a Spanish couple who were scuba diving with us. I’m not really sure why we took the class beforehand, because we spent the whole morning going through the class with the other couple. We already knew everything, so it didn’t really seem like the best use of our time. The Spanish lady was having some issues clearing her mask and following all of the instructions so it took a lot longer.

We finally took the boat out into the ocean. We jumped off the boat and began the descent. I could tell Andrew was having a blast, but about halfway down I wasn’t able to “equalize,” or pop my ears and adjust to the pressure. I had caught a cold the day before, and it hurt too much to go further, so I surfaced and waited for the others to finish. I was a little disappointed that I didn’t get to go all the way down, but Andrew had fun so that made it worth it to me.

Overall, a super relaxing week with my best friend in the sun! 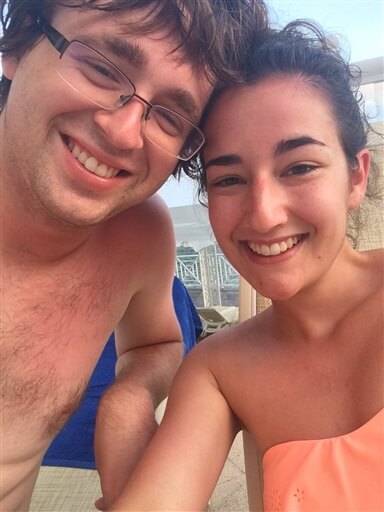