I can’t believe that Christmas has already come and gone! Nonetheless, I hope everyone had a very merry Christmas! Mine was fairly simple, but lovely (for the most part) as always.

On Christmas Eve, I took Tabor with me to PetSmart. I had stopped by about a week before to see if there were any treats I could find him and they had these huge, two foot long bones from $5 – $7, which was incredible since they normally run upwards to $20. I bought one of them for him. He was being excessively energetic that morning (it was as if he knew it was almost Christmas!) and I wasn’t doing anything so on a whim, I decided to go and see if they had any left to save for later. He loves car rides, so he hopped right in. About halfway to the store, he started whining and I couldn’t figure out why, until I realized it was because the window wasn’t down. x_x It was freezing outside, but against my better judgement I put the window down and held onto his leash so he wouldn’t try anything stupid like jump out the window (he’s done it before).

It was the funniest thing, because he would stick his head out the window, his ears flapping and his mouth wide open, for about 30 seconds and then would stick his nose back inside to warm it up. I love that dog. When we got to the store, he was scared to go in because the floor was tile and his nails are pretty long so he slides around. But he got over it and just wagged along next to me as I looked at the bones that they had on sale. There was a man next to me who had five or six two-foot-long rawhide bones in his arms, babbling that they were such a great deal, with his cart piled with more bones. I love my dog, but I’m not going to spend $50 on him! I settled on two clearance bones and we checked out. Then I felt bad when I got home because he wanted them – but it wasn’t Christmas yet! 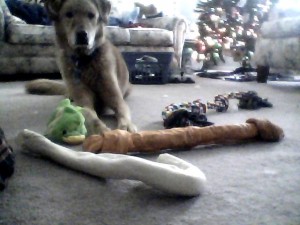 ‘Twas a good haul for the dog this year.

My parents wanted me to attend their church’s Christmas Eve service, which was really a drag. Not because I don’t like going to church, but because I attend a different church than my parents. It’s not something I’ve shared on my blog, one because it would take a short book to explain everything; and two, it’s still a bit of a sore topic for me. In a nuthsell, my parents left our church and found a new one, while I still attend my old one. We used to always attend my church’s candlelight service together, but my mom wanted the family to be together (even though my brother Steven and sister didn’t attend…) and it was just so awkward. The church is in a nicer part of town than where we live so it basically was just a bunch of snobby rich people gathered together. I think my parents have been going there for about a year and a half now, and only three people said anything to them… The service itself was okay, just not what I was used to. It was long and just seemed really weird not being at my home church.

My mom was peeved at me afterwards because “Becca didn’t want to be there and you could tell it.” *shrug*

We had our traditional junk food night afterwords where we just ate all of our favorites. I love Little Smokies, and we only ever have them on Christmas Eve and New Years Eve. Mmm, not to mention the toasted ravioli (a St. Louis classic), cheese dip, rye pizzas, shrimp, cheese and sausage and crackers, and pineapple with jello sprinkled on top. It’s not Christmas Eve at our house if you don’t eat enough calories for a small army! My aunt joined us and normally my grandpa would, be he was in a bit of a funk and “didn’t feel like getting out.”

Christmas morning we slept-in until 10:00 AM and then made a large breakfast. It’s fun because I always do the pancakes, my dad the bacon, my sister the biscuits and gravy, and my mom the eggs and potatoes. Of course, I had given Tabor and Macy some of their toys so I kept getting distracted in watching them play with and fight over them.

I received some fun gifts this year. I love sock monkeys, so my mom got me a sock monkey santa hat that I wore the entire rest of the day.

I hate bugs, so my dad got me an electric fly swatter. It’s basically a small tennis racket with metal netting that, when you push a button, emits an electrical current that zaps the bug. I’m not much of a sadist, but I will do whatever I need to do to kill a bug that is near me. I think it will prove very handy in the coming months in my dorm room. My mom and Ryan bother shocked themselves already, haha. I then received some books and movies that I had asked for. Me and Ryan always have this thing where we try to make it impossible to open each other’s presents, so this year he got me a book and screwed two boards around it, then nailed it and bent the nails. He was mildly disappointed when I just took a hammer to it and pried the wood apart. Not so dumb for being a girl, eh?

I simply duct taped and wrapped it a million times in a few boxes and then set it on top of the vault that we have in our living room. I had to get the ladder out to put it there the night before, but of course he’s so tall that he simply had to get a chair and reach up and grab it. -.- I think my favorite gift that I gave was to Steven. He loves the Big Bang Theory (a TV show), and on there Sheldon uses this folding contraption to fold his shirts. So I thought it would be funny to get him one, and I think he really liked it. Though I think my most-used gift will be a blanket I got Andrew. It is so. soft.

Andrew has been sick the past few days, the poor thing. I think he caught the flu. He was sent home from work early on Thursday because he was puking, so I haven’t been able to see him too much. But he was feeling better yesterday and today, so I might see him tonight and watch some of the new movies I have.

The year’s coming to a close soon; it’s weird thinking that it will be 2013. I really only have a few goals in mind, but those will be elaborated on later. I finished Wuthering Heights today by Emily Bronte. It’s a book I’ve been trying to read since probably the 10th grade and for whatever reason I could never get into it. While it wasn’t awful, the characters were so unlikeable, I just felt so blah after finishing it. It’s a powerful book, but I honestly can’t tell you more about how I feel about it.

Now I think it’s time to polish off the rest of this Christmas candy and cookies.

I have an addiction with buying books, and it is really unfortunate considering the fact that I’m a college student and really don’t have any extra money to spend. But Barnes & Noble keeps sending me these discounts and sales promotions to my e-mail for beautiful leatherbound classic books like these and I just can’t resist! So this is why I’m typing up a new blog post because I currently have $50 worth of books in my shopping cart and I’m trying to not press the ‘check out’ button. I’m also to the point though that I’m forgetting which books I own and which I don’t… so I should probably wait til I get home to double check. D’oi.

I also should be studying for my last final that I have tomorrow… but nahhh.

I met with one of the administrator’s to fill out the paperwork for my job this morning.

I’d say it was exciting, but it was filing out tax forms and that would be a complete lie. It made me happy to know though that it’s all official now. I just have to send them a voided check and then I’ll be ready to start working for next semester.

Though the check thing has me a little worried, because over Thanksgiving break (about 3 weeks ago), I ordered some checks and I was supposed to have received them by now. I sent them to my home address, so my parents may just be blind and may not see the box among the other boxes of Christmas presents I have bought that are apparently piling on my bed. I’m going home tomorrow (!!!!!!!!) so I’ll figure it out then. Hopefully they haven’t gotten lost in the mail.

I’m so ready to go home. This first semester of schooling for me was a bit rough and I’m just really tired. Tired of school work, of long assignments, of cafeteria food — especially this week since it is finals week. I mean really, they served nacho cheese with macaroni the other night. They really have just given up. *barf* And I miss everyone back home.

Finals week has been pretty easy for me. I had two French finals and then a Psychology Final, and the rest of my classes I just had projects. I know that did great on my French oral – I somehow managed to get a 98% on that. Talk about miracles. Not so sure how I did on my written final, but I’m not too worried. I’ve pretty much accepted the fact that I got a B in the class, and that’s okay. I have my last final tomorrow at 10:30AM, so I’m hoping to be finished by noon and then me and Andrew and another friend will be heading out by hopefully 1.

Did I also mention that The Hobbit comes out tomorrow at midnight? Did I mention that this dork will be attending the midnight premiere. Did I mention that I get to see my best friend there, too? Weeeeee! Super excited for the movie! Not excited about leaving the next day for Pennsylvania to see my grandma, but that 12 hour drive I will be getting much needed sleep. And it will be good to see her. I haven’t seen her since my grandpap died, so this trip will be a bit different.

So basically I haven’t done anything the last couple of days but watch The Office and play dumb computer games. All for the sake of procrastination, and it’s been a lovely last few days of doing absolutely nothing.