I have no idea why I’ve waited so long to blog about this but….

Andrew and I celebrated our four year anniversary on Saturday, March 29th, and we went to The Melting Pot to celebrate and do the whole “fancy dinner thing” that we never seem to really do.

Afterwards, as we were walking back to the car, he got down on one knee and asked if I would marry him. Speechless. Absolutely speechless. But I did say yes.

I cannot tell you how incredibly excited I am! 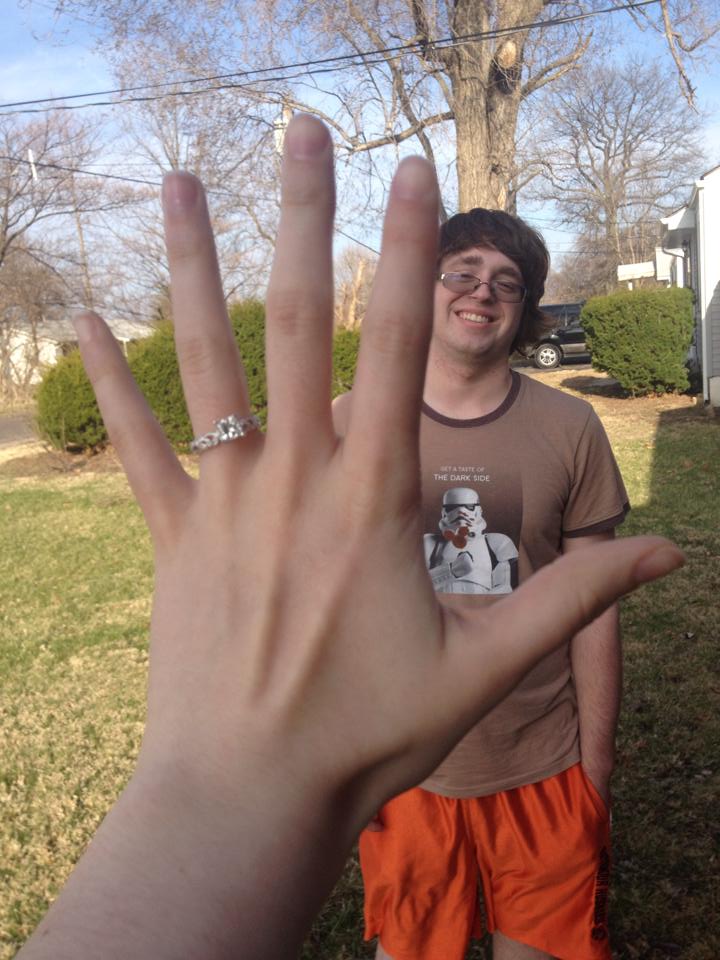 I didn’t think to snap a picture until a day later, so no, he didn’t propose in that outfit.

But isn’t the ring gorgeous. He did so well!

I think that apartment searching with horrible roommates has to be it’s own circle of hell.

I am so sick of my future roommates and I’m not even living with them yet. My current roommate is moving back home next year, so I’ve had to find new roommates for next semester. All of my friends had already paired off so I know of two friends who were cool with rooming with me next year.

It was probably the worst decision to make.

First off, searching for a three bedroom apartment, at least in my area of Kansas City, for around $750 and not be in the complete dumps is impossible and thirty minutes from school. I tried explaining this to them well in advance when we first started look for apartments about two months ago, but they were still stuck on the idea of three bedrooms.

I met with them just an hour ago to talk because we hadn’t found anything yet. We agreed that we were just going to have to start looking at two bedrooms because three bedrooms just isn’t plausible for our area and price range. I threw out the idea of just moving into my current apartment; it is a little small, but it would be enough room for three people and the room that two people shared would be roughly the size of a dorm room, so it’s not like it would be something we hadn’t done before. And the rent would be so cheap. Between the three of us, rent and utilities would only be $225 per person a month. That is so ridiculously cheap. And I am all about cheap!

For privacy reasons, I’m going to call one of the girls Satan. So Satan says in response to my idea, “I don’t want to share a room and I hated living in the dorms. So I need my own space and I need a lot of it. Plus I have way too much clothes and I wouldn’t be able to share a closet. Plus my two dressers and a desk and my queen sized bed. It wouldn’t be enough room for me.”

So I suggested some other places to which she immediately says that they are out of her budget. By now I’m trying to control my emotions because I was getting very annoyed very quickly. She makes a suggestion about living in North Kansas City, which is about half an hour away. Me and the other girl both said that that was too far for us because we can’t afford to pay that much in gas every single day.

Satan then wants us to specifically border which streets we are refusing to live past when we had already agreed we would take the distance on a case by case basis. She then proceeds to ask us why we aren’t willing to drive that far (which did I not already explain this?) I told her that I am here, in Kansas City, to go to school. So why would I pay to live somewhere far away from school when there are plenty of places right by campus? The other girl lives about 45 minutes away, so it would be stupid for her to pay to live somewhere that’s 30 minutes away when she could live at home for free.

So Satan starts to throw a fit about how she wants to live in North Kansas City and doesn’t want to live by campus.

She is just so unwilling to compromise or even help with the apartment search. I am so ready to punch her in the face and I’m not even living with her yet.

So I was really upset after meeting with them because they want to pay a lot of money for an apartment far away from campus just because it’s spacious. I can’t afford to do that. I don’t need a lot of space. I’m willing to share a room with the devil so that I can save some money.

I called my mom because, as ever, she’s always my go to when I’m about to cry. She told me that we would talk about other options over spring break when I come home this weekend. My only other option is to live in a studio by myself which I can’t afford. I cannot afford to do that.

I don’t know what to do.