Day two in Denver was rather uneventful. We planned on touring the Denver Mint, but apparently you have to make reservations a month in advance and tickets sell out in minutes.

Who knew?? So with that scratched, we visited the Denver Museum of Nature & Science. Andrew loves everything science, so I more just tagged along. We spent most of the morning there look through all of the different exhibits. I really didn’t take any pictures because it seemed like any other science museum to me, though they did have an exhibit on chocolate that was pretty interesting. I finally learned how to pronounce “cocao” (kuh-kow, or kuh-kah-oh).

For lunch, we went to a restaurant downtown since we were in the area. As far as I know, there are only a few locations around the United States. and we have one in Kansas City that I have been to and really enjoyed. We were greeted by a really friendly hostess who seated us promptly. We looked through the menu and decided to get an appetizer and a couple sides, since they had a large menu with a lot of variety and we wanted to try a bit of everything. It probably took us ten minutes to decide what we wanted to order when we realized we still hadn’t been introduced to our waiter. So we waited.

Finally, Andrew was able to flag down a passing waiter. We explained to him that we hadn’t seen our waiter and he took our order for us, and then said he would find our waiter. So we waited some more.

Twenty minutes after we were seated, we finally met our waitress, who muttered a lame excuse and then took another ten minutes to bring us our waters. We were there for half an hour before we even received waters.

Then, we had to wait another fifteen or twenty minutes for our appetizers. We had both emptied our waters with out waitress still nowhere to be seen. We finally received our appetizers after forty-five minutes of being seated. Andrew had ordered some chicken wings, but I didn’t care for the sauce. I had ordered a cup of chicken tortilla soup, and it was really good. Easily the best I have ever had. We were still working on our appetizers when our entrees arrived – which I am glad they didn’t take another half hour, but I was annoyed that we received them within minutes of ordering our appetizers. We didn’t even have time to finish our apps – and we both eat really fast!

Andrew had ordered a burger and fries and his fries were stone cold. Normally, neither of us would have minded that much if our food was lukewarm; we’d just eat it and not be a bother over something small. But since we had had such crap service since we arrived, and we had ordered quite a bit of food, I think it’s only fair that our food is at least warm. So we caught a different server (because ours was still missing) to ask if he could get new fries.

I finished my soup and my pizza, and Andrew finished his burger. Our drinks were still empty and it had been about ten minutes since Andrew had asked for new fries. At this point, we were both just ready to leave. Andrew caught another server (surprise!) and asked if he could speak to the manager. The manager came over and Andrew explained the whole debacle, and the manager apologized and asked if we would want free dessert. We both declined as we were full, and we weren’t expecting anything free, we just wanted the manager to be aware.

We also just wanted some water because I was freaking thirsty.

But then the manager offered to take care of our whole meal. Our bill probably would have been around $50, so that was a nice surprise. The manager genuinely seemed concerned and apologetic about the service, so because of that, I would consider going back to the restaurant, but definitely not anytime soon.

We were both ready to head back to the hotel since lunch took such a good portion of the afternoon. The hotel had a swimming pool, so we spent the evening swimming and then relaxing. Despite the poor restaurant experience, we really enjoyed our day and overall had a fun two days in Denver!

We spent our third and fourth day of our spring break trip in Denver, which was only about an hour and a half drive from Estes Park. We drove down in the evening so that once we got there, we could just check into the hotel and relax. While we wanted to see as much as we could while we were there, we also wanted to just soak up the time we had together away from work and school and just enjoy not having to do anything.

The first thing we did next morning was drive thirty minutes outside of Denver to Lookout Mountain in Golden, Colorado. I’ve have friends that have gone there and said the views were great, so we wanted to check it out. Like in Rocky Mountain National Park, once we got up in the mountain, there was a lot of snow, so we had to be careful when we were climbing around on the rocks. Though it was pretty hilarious watching each other struggle through the couple feet of snow to find good vantage points.

Andrew was a little more adventurous than I was, so there were some rocks that he climbed up and I stayed back. He almost gave me a heart attack when once he got really close to the edge and then slipped a little on the rock! But it does make for a cool picture. 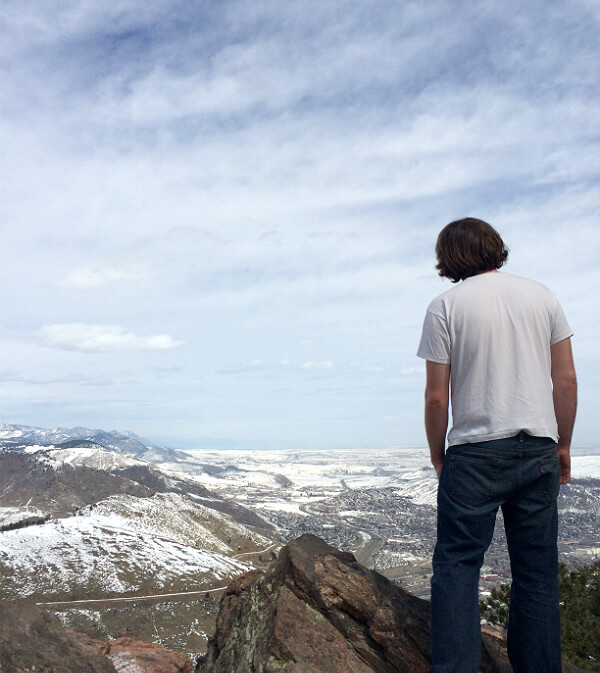 We were going to hike the couple mile trail that led down to an observation area on a lower section of the mountain, but the trail was so steep and so slick with snow, that we didn’t make it very far. I don’t mind tramping through snow on a flat surface, but I could imagine one of us slipping and falling right off the edge.

So we drove instead.

We didn’t realize but the lookout point was right next to the Buffalo Bill Museum and grave. I didn’t think it sounded very interesting, but Andrew thought it would be fun to go through, so I was a good sport and tagged along. Tickets were only $5, so why not? The museum was really just a timeline of Buffalo Bill’s life. If you’re not familiar with who he is, Buffalo Bill was a showman who put on rodeo shows to showcase the wild west. I was so bored; no matter what museum we go to, Andrew has to read every little sign. Normally I don’t mind, but I skimmed through the museum and was ready to go!

We headed back for Denver to have lunch. I looked up some local restaurants online and we settled for Cherry Cricket, a restaurant downtown known for their burgers. I don’t like burgers (I know, I know, sue me) so I ordered a salad. Andrew loved his burger. He said, “This is the best burger I have ever had.” He was disappointed that we couldn’t come back again for dinner or lunch the next day. xD

My salad was as delicious as it looked, by the way.

After lunch, we visited the Denver Botanical Gardens. I read great reviews online, but we were really disappointed when we got there. Back in St. Louis and Kansas City, everything is in bloom, and my eyes and nose definitely both know that the pollen is in the air. In Denver, however, it was still winter, so there were very few actual flowers in bloom. I guess that was more my fault in not thinking it through, but it was disappointing to go to a garden and not see flowers.

To kill time afterwards, we visited the Denver Public Library and City Park, both which were only a couple minutes from the gardens. We spent probably an hour just roaming through downtown and seeing the capitol building (at least what we thought was the capitol building! haha) and some of the cool architecture.

Tired from being on our feet all day, we got something quick for dinner and then went to sleep! We are an old married couple.

And that sums up our first day in Denver!