I have this really awesome English teacher, and around last November, she was trying to get a group of students together to run a half-marathon with her. At first, I thought it would be a great opportunity to just overall get in shape. The only drawback was that it would cost $90 to enter. Since then, I’ve decided that I’m not going to run because I’m not sure if I’ll be ready for a half-marathon in such a short amount of time. But, I decided that I am going to train for it so I can just keep in shape and live a little healthier.

A few of my friends had decided to enter or train so it’s nice that some of my friends will be doing it with me. We just started to train for it on Tuesday after school and we jogged the majority of 3.2 miles. Whooo. Let’s just say that I am so out of shape.

The beginning and end of the run was alright, but in the middle I think I pushed myself a little too far because I started to get dizzy. Nonetheless, I want to keep up the runs after school.

We were planning on running on Thursday as well, but surprise! We got the first snow of the year! 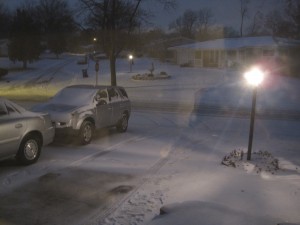 (And as a side note: I should not have to get up before the sun!) I was a little disappointed we couldn’t go running, but I love snow so I wasn’t too bummed.

Since I couldn’t run on Thursday, I decided I would jog to keep up just on my own. Since it was absolutely freezing outside, I ran on the treadmill that we have downstairs. My parents bought that thing forever ago, probably seven or eight years ago, and no one in my family hardly uses it. My mom used it at first, but she didn’t like it very much so no one else really used it. So I thought that I would put it to good use.

Unlike the first time I ran with the group where I had pushed myself too hard, I slowed it down a little bit and it felt really, really good just to exercise. A cold shower afterwards feels just as good, too.

Since then, I’ve gone jogging on the treadmill a couple more times and each time I paced myself and again, it felt really good just to exercise.

I used to really, really hate running. Now that I think about it, it was always because I pushed myself way too hard or I would just jump into things without being prepared. I remember one time last year I did a P90X workout and I had pushed myself so far that afterwards I was throwing up and had to just go to bed. I just wasn’t ready for that kind of a workout. You’d think that I would have gotten the hint after that but I just kept blaming on it on other reasons.

Whenever I went running with friends, I would always try to exercise on their level and it would feel absolutely awful. I guess I just thought that that’s what exercise was supposed to feel like. I didn’t realize that running could actually feel good. So I’m just going to keep running on my level and eventually I’ll catch up to them. Me running shouldn’t be all about me comparing myself to others; it should just be about me comparing myself today to myself yesterday.

Running hasn’t been a new year resolution of mine, but I am hoping to keep it up. On a bit of a different note, to celebrate the new year a bit more, I’ve done a site clean-up. Sometimes I have to remind myself that this website is for me to write. Write blogs, articles, whatever. Just write. I tend to get carried away though, so I sifted through my older articles and went on a bit of a deleting spree. I also got rid of all my “graphics/resource/tutorial” …things. It looks so nice and clean now.