I just want to say, be freaking thankful for everything you have and all the people in your life, because you don’t know when it’s going to be taken away from you. I just got in a car accident that scared the flippin’ shit out of me.

Me and my good friend Allison went out to the Rascal Flatts concert that was in town tonight with Sara Evans and a couple other people. We both love Rascal Flatts and have gone to a concert of theirs two years ago, and it was amazing. This one was no different.

It took about an hour to get out of the parking lot, and there was a ton of traffic once we got onto the road. We were just about to merge onto the highway when I heard screeching and the Jeep in front of us just stopped. Reflexively, I threw my hands up in front of my face, and Allison slammed on the brakes but we still slammed into the car in front of us.

The next thing I remember hearing is screaming. The airbags were deployed and there was glass everywhere. Allison was okay, and so was I. My God, I was so freaking scared. There were five cars total in the accident; we were the last one. One guy was screaming his head off and cursing at someone and the girl that was screaming was just sitting on the side of the road with a bunch of people huddled around her, crying. We didn’t find out how badly she was hurt, but we saw blood. 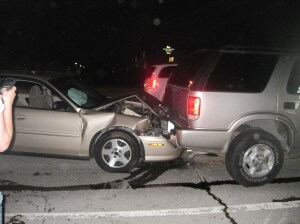 Me and Allison got out and I called my mom. Someone had called 911 and shortly after the police and an ambulance came to take the girl to the hospital. My mom said she would come drive out. We tried to figure out why the first car just stopped from the people that we hit, but they didn’t know. They had heard that the guy’s brakelights didn’t work, but I don’t know if that’s the whole story or not. 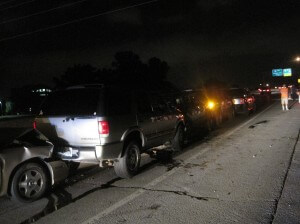 I swear if someone was drinking, I’ll kill them.

I have never been so freaking scared in my life. I could not stop shaking the entire time after the accident. I am just so, so glad that Allison was okay. She thinks she hit her arm on something, so her arm kind of hurt, and both my knees hit something pretty hard, so I’m sure I’ll have bruises from that and from my seat belt. We were both wearing them. I just thank God we’re okay, we’re okay.

Cars can be replaced; people can not.

21 thoughts on “Nightmares Turn to Reality”