Over the weekend my parents and I traveled to Kansas City for my college orientation. Since it’s about a three-and-a-half hour drive from Saint Louis and orientation started at 8 AM, we left the night before and stayed at a hotel.
A family friend works at a Sheraton hotel, and to put it simply, they are very nice. Their rooms at the cheapest are usually around $130, which is a lot higher than my family’s budget. As you all know, I work at a Holiday Inn, which are not bad hotels, they’re just nothing fancy. So anyhow, this friend let us use her discount and we stayed at a Sheraton.

Maybe it’s me, but it was almost too fancy. The place was so big that we couldn’t even find the lobby to check-in when we were entering from the parking garage. It was ridiculous. One of the employees was walking by and must have realized that we were totally clueless and took pity on us. He directed us to go down an elevator, get off and then get on another elevator to go back up one. :x

I think I’d prefer the slightly smaller rooms and beds to the ones with the chandeliers because at least I can find them.

Orientation itself was alright. It was a lot of being talked at about things we’re going to experience and find out ourselves. We didn’t even get to speak to our advisers for classes until around 1 PM. But that’s just me being impatient.

When I had applied at UMKC, I had declared myself a French major. Since then, I’ve somewhat thought about it and don’t think that that is the direction I want to go – although I’ve no idea which direction I would like to go. So my adviser was a French professor and she was very kind and helpful. She suggested that for now, I stay with my French major and try out some classes and go from there. She told me it was easy to switch majors and that if I wanted to minor in French, that would be easy, too.

Since I had taken four years of French in high school, she put me in third semester French (two years of French in high school = 1 semester in college, apparently). I had scored a 3 on the AP English Exam and took Writing Workshop as duel credit so I was able to skip out on the first semester Englihs class. She was also impressed that I scored a 33 in the English section on my ACT (a pretty high score, out of 36) so suggested that I enroll in the Honors English class.

Which is when I started getting nervous.

Yes, I had taken honors courses all throughout high school so that they would prepare me for classes in college. Yes, I’m fairly confident that I’m a strong writer. No, I am not enrolled in the Honors program. I don’t have a clue whether or not I’m prepared for a second semester Honors English class or 3rd semester French.

She encouraged me to sign up all my classes as Honors, but I declined. I think I’d like to try just the regular classes first and the one Honors English. Then I could compare and decide whether or not the Honors program is right for me. So for my first semester I will be taking Arts & Science 100, French 211, English H225, and Psychology 210. 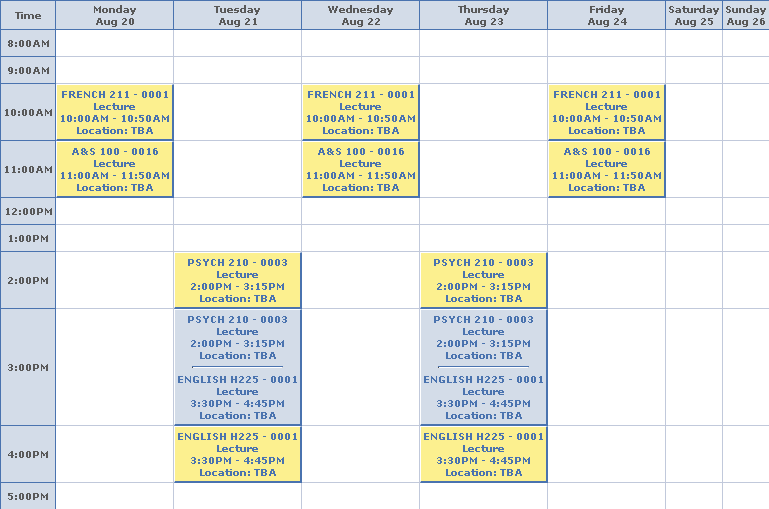 It’ll be nice not having class on the weekends, super late at night, or really early in the morning. So I’m really happy with the schedule that I have.

I think what I’m most worried about this fall when I head off to college is making friends. Around people I know, I can loosen up and just be myself. But when I’m around people I don’t know, I kind of clam up. I smile and laugh, but I don’t know how to jump into the conversation or know what to say. I guess what I’m saying is I’m scared everyone else is going to hit it off right away and I’ll be that awkward person by herself. And end up with a creepy roommate. :blink: (Apparently the residential assignments were posted online at the website, but whenever I go to see mine the page doesn’t load. :()

On a completely different note, I finally finished A Clash of Kings in the A Song of Ice and Fire series. Only took a month, but these books are insane! Anyone else reading/read them?