When I went to Europe last summer, I wanted to write a series of posts about my trip and share the experiences that I had. I had planned to write a post for each day of my trip; however, since my trip, I’ve managed to write a whopping one post about it. :blink:

Since it’s almost summer again (is it even spring yet? I may be getting ahead of myself) I feel a little bit silly just plugging them into the middle of my blog now. But I still want to share them. I’ve also wanted to share my travels to Greece, Turkey, and England the year before, but wasn’t sure quite how to do that yet. So I had been thinking a bit about it, and I really want to open a travel blog.

I say “travel blog” a bit loosely, because I really don’t know what else to call it. I currently don’t have any plans for any major trips in the near future, so it’s not like I would be updating regularly. I also thought I would include cities around me and when I head off to college, fun pit stops and whatnot.

Nonetheless, the more I think about it, the more I really like the idea. I’ve always wanted to share pictures and stories from my trips but was never really sure how. And I absolutely love to travel, so even if I never step out of the United States again in my life, that doesn’t mean that I won’t travel to wonderful places inside the USA. So I think that this would be a wonderful way to do it and I think it would be a really fun project.

I’ve been mulling over domain names for a little bit and I think I’ve finally settled on one that I like: thenexthorizon.org. I think it would be suiting for a travel blog and I like the sound of it.

It also might help a little bit that whenever I think of horizons I think of a certain sexy pirate captain played by a ravishing Mr. Johnny Depp. BUT ANYWAYS.

Putting this site altogether will take a lot of time, I realize, so I’m hoping on buying the domain soon and then working on it over my spring break which is coming up, the entire last week of March. That would give me quite a bit of time that I could devote to it and really get this thing running. I’m pretty excited.

Would you all be interested in reading about my trips?

The last couple of days this week in South Carolina have been really cloudy and kind of gloomy, not exactly what you would expect from the beach. But while we weren’t exactly running to go to the beach in this weather, it had some blessings in disguise.

All around the island there are bike paths and you can rent bikes for pretty cheap, so my family rented three bikes for the week.

We don’t ever do any biking when we’re at home. It’s just kind of an activity that we always forget about and our neighborhood is pretty busy so it’s hard to bike around in our area. The paths are really nice here and it’s almost like riding through a jungle or forest at times. It’s just a really relaxing environment and you don’t get too hot or sweaty, so it was really nice just biking with my family. There is just so much vegetation and it’s all so gorgeous! It’s also kind of funny to see these little kids zooming by me on their little kid bikes, knowing that when I was their age I didn’t know how. 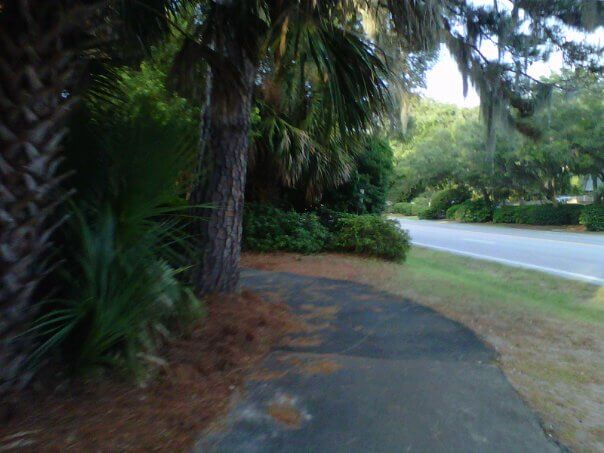 I remember when I got my first bike. It was a pink and white barbie bike and it had little pink and purple tassels off the handlebars; it was about as girly as you could get. I got it as a birthday present for my seventh birthday, and I was so excited that I finally had my very own bike! My uncle even contributed a little white basket that would hang from the front and I had a matching barbie helmet.

I loved riding my new bike. Of course, I hadn’t had a bike before that so I hadn’t learned how to ride a bike yet, so I was still using training wheels. Whenever we would go up to my aunt’s house for barbeques and to swim, I would bring my bike and my dad would take off the training wheels. I would try so hard to learn to ride it and my mom would be there by my side, holding on to the seat, but once she let go, I always started to wobble and would eventually fall.

Eventually I just gave up.

I guess I got tired of trying and failing repeatedly, so I never learned how to ride a bike properly. My barbie bike became forgotten in the shed in our backyard, and I didn’t have the desire to try and ride it ever again.

When I was 13, my family went up to visit one of my aunt’s and uncle’s in Indiana. My brothers and sister had to work or didn’t want to go, so I was allowed to bring a friend with me to tag along. We stayed at a friend’s house who were out of town, and during the day, me and my friend grew bored. Our friends had some bikes in the front that they said we could ride. Naturally, I didn’t feel inclined to since I didn’t know how, but my friend was very persistent. When I told her that I didn’t know how to ride a bike, she didn’t laugh or make fun of me, she just simply said, “Well today you’re going to learn!”

It started off pretty rough. I fell countless times, but I didn’t want to wuss out with my friend there, so I kept trying and to my own surprise, it eventually paid off! I remember that first time that I rode that bike without any help, and it was so scary and exhilarating. I just started squealing and my friend was just laughing and clapping, relieved that I had finally gotten it down. After I stopped, I was so nervous that I would somehow forget how to ride and I would have to learn all over again, but once we got to the bike paths, I was doing fine, albeit a little wobbly. I always told her that I was indebted to her for teaching me how to ride a bike.

Whenever we talk about that trip we just always giggle and crack up.

Since then, I biked a lot more just because I knew I could. Now, I’m better but I still wouldn’t say I’m comfortable on a bike. I think that’s just because I don’t do it enough to get comfortable with it. Plus, I always have to borrow my sister’s bike. We got rid of my old barbie bike forever ago, but we never replaced it. I really like riding, it’s really relaxing to me and just overall enjoyable, but after I get off my arms are kind of shaky and sore, which doesn’t make any sense at all. It’s really bizarre. :?

Do you remember your first bike or when and where you first learned how to ride?