The weather is getting warmer and my last semester of undergrad will be coming to a close on Monday!

I’ve got a lot of studying to do this week and a huge report that I have to start finish, but I’m so excited about being done with school. I’m mentally planning all of the things that I want to do after our move back to St. Louis is complete and I have some more free time. One of those things that I’m excited about is running. 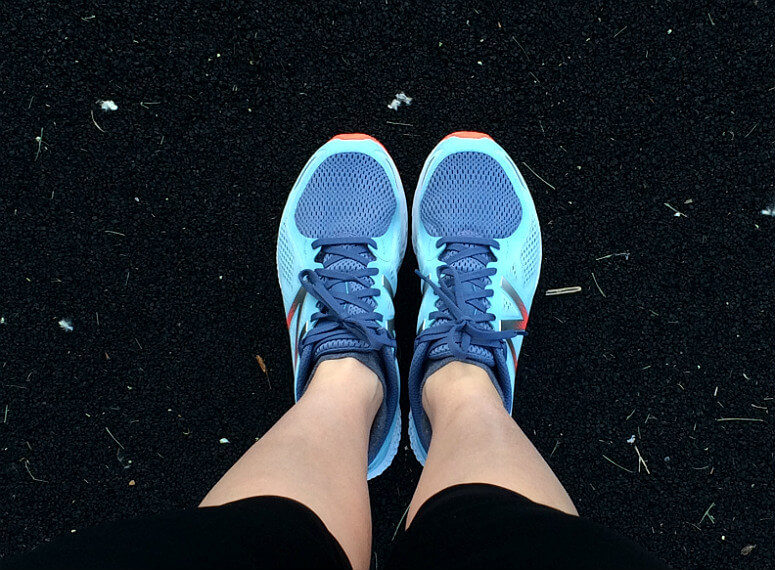 Every summer, I get back into running. It’s like clockwork; once winter arrives, it becomes too cold for me to run outside. Since I’m not fond of treadmills or gyms, the running ceases until the weather becomes warmer again. My first run of the year is always like greeting an old friend. It felt really good, but my foot was hurting a little bit afterwards and I was pretty sure it was because of my shoes.

The tennis shoes I had been using were ones that I’ve had since my junior year of high school. I looked back at some pictures taken during tennis season and saw I was wearing the same shoes! They were really starting to fall apart – and no kidding after almost six years.

So I went out and bought a new pair from Kohl’s. I really like New Balance, so I picked out a pair that seemed comfortable and were a pretty reasonably price. But when I went running in them later, the shoes really hurt the arch of my left foot. I’m assuming they must have had some built in correction for pronation, but since I have a pretty normal gait, it just really hurt – and more so than my old shoes!

If there is one piece of advice I hear over and over from experienced runners, it’s that it’s worth it to invest in a pair of good running shoes. What’s kept me from doing that in the past is how expensive they can be. My sister-in-law used to work at a running store called Fleet Feet, so I knew that a good pair could be anywhere from $100 and up. The price tag is a bit scary, but I knew if I wanted to keep running, a good pair of running shoes would be worth the price. There is a local Fleet Feet in Kansas City, so I figured that would be the place to go since they offer professional gait analysis for free.

The store was empty when I first arrived, which was nice because I got the attendant’s full attention. She was really friendly and asked me what kind of mileage I was doing and what shoes I had been using before. She flipped my shoe over and showed me the wear on my shoe; I tend to strike on the inside of my heel and then midfoot. She then took some measurements of my feet and then analyzed my arches while I was standing and while I was walking. Apparently I have pretty normal feet.

Since I tend to like New Balance shoes, she brought out three different pairs; each had a different size cushion and heel, and she suggested the two that had more of a cushion. She also let me use socks that were designed for running while trying on the shoes, since I just had plain cotton socks with me, which was nice. I tried them all on, but the one that felt the most comfortable was the mid-sized cushion. They felt very light instead of clunky, which I liked, but they still provided enough support. It was a bit tight in my toes, though. I was wearing a 9, which I normally wear an 8 or 8.5, but I know that with running shoes you tend to get a size larger. The 9.5’s felt really good, but they were a bit loose in my heel. She tied the laces using the second eyelet so that it would bring the back of the shoe forward and that helped.

She wanted to show me a few more brands to see if there was anything else that I liked better. They were all lighter shoes, so they were very comfortable, but they just didn’t fit as well as the New Balance. I have a really narrow heel, so on some of them my heel kept slipping, even with the laces tied to bring the back forward.

I kept going back to the New Balance shoes. I walked around in the store with them on and they felt very comfortable and secure, but I wanted to make sure they felt right while I was actually running and didn’t cause any pain. She said it was perfectly fine for me to go outside and run in them, so I took her up on the offer. I jogged down the sidewalk past the other stores in the shopping center, and they felt very light – and best of all, no pain!

That confirmed my decision for me. These were the shoes! I was very excited to have found a pair that fit so well, but also were pretty cute. Oftentimes runners have to picks shoes that are comfortable and fit right, but don’t come in colors they care for. So I lucked out on both.

I went in and nervously asked the price. She said they were one of their more affordable shoes at $100, so I was really happy to hear they weren’t more than that! I also ended up buying the pair of running socks she let me use while trying on shoes, but I only bought the one pair because they were $12! That’s a bit much for one pair of socks, but they were really comfortable and I know they will help with blisters. It will be nice to have a good pair for races and for a couple runs a week (depending on when I do laundry).

Overall, I was really happy with my experience at Fleet Feet. The service was great, and even though the shoes are a bit pricey for me, I think the shoes I bought are really worth the money I paid for them. Plus, I think this will motivate me to keep running past the summer months. My sister and I signed up for a 5k in September, so I am already envisioning super runner Becca.

Note: I was not paid or compensated in any way for sharing my experience with Fleet Feet Sports or my New Balance running shoes. All opinions expressed are my own and are not influenced in any way.