Andrew and I spent the last week with my family in Daytona Beach, Florida. My parents own a timeshare there, so it’s a familiar spot for my family, but this was the first time that Andrew would be joining us. Everyone but my eldest brother came, so it was really nice having almost the entire family together again.

The weather was beautiful all week long. There was a bit of rain the day we got there and the day that we left, but I couldn’t have planned it better.

I love the beach. We were pretty lazy most of the week (which is why this blog post is a bit late). In the mornings, we would put on our sun tan lotion and hit the beach. Andrew got really sun burnt the first day, so he wore a shirt the rest of the week. I felt bad because he burns so easily! He is just too white.

I brought my book with me most mornings, but I liked to swim in the ocean and just relax in the sun. I did end up reading three books over the course of the week, though!

We also took a lot of walks during the day and at night. Walking on the beach is so much better than just walking in a park here, for sure!

While me and my family are content to lazy around, Andrew was a bit bored, so we planned a day to visit Universal’s Islands of Adventure. I had visited four years ago with my best friend Becky and we loved the The Wizarding World of Harry Potter.

We hit a lot of traffic on the way into Orlando, so we didn’t get there as early as we would have liked. It took almost two hours to get there, where normally it only takes a little over an hour. We went to the Harry Potter section of the park first, since we figured that would get busier as the day went on.

We headed towards Dragon Challenge first, since there was practically no line, and were surprised when two attendants told us we weren’t allowed to carry anything in our pockets. I wasn’t even allowed to keep my phone in my pocket. I was a bit annoyed, but we got a locker anyways and then started our way through the line. There was another security check point where they actually had metal detectors and wands to check that people weren’t bringing anything. It was so strict that it almost took a lot of the fun out of it. I also couldn’t have my phone so I couldn’t take any pictures. But the ride was still very fun!

We headed to Hogwarts Castle next to ride Harry Potter and the Forbidden Journey. I think this was my favorite ride because the line takes you through Hogwarts. It made me feel like a student walking through the corridors and seeing the moving paintings on the wall. The Sorting Hat was also there to greet us, unfortunately he didn’t sort me, haha. The ride itself was a 4D ride, and normally I am fine riding roller coasters, but this one made me a little queasy. But other than that it was really fun!

We rode Flight of the Hippogriff next, which was like a mine train roller coaster, but it was very jerky and the seats were very small and uncomfortable – and Andrew and I are both just average-sized. So we visited Honeyduke’s, but it was all really crowded by this point that there were lines to enter all of the other shops, so that’s the only one we visited.

I bought a couple of soft pretzels (one of my favorite things about theme parks!) and we shared some Dippin’ Dots later, which I haven’t had in a long time. We visited the other sections of the park, but I think Andrew was a bit bored because there really weren’t a lot of big roller coasters. One of them was shut down because they were adding some new features to it, and another they had just built but it wasn’t open until later in the summer. 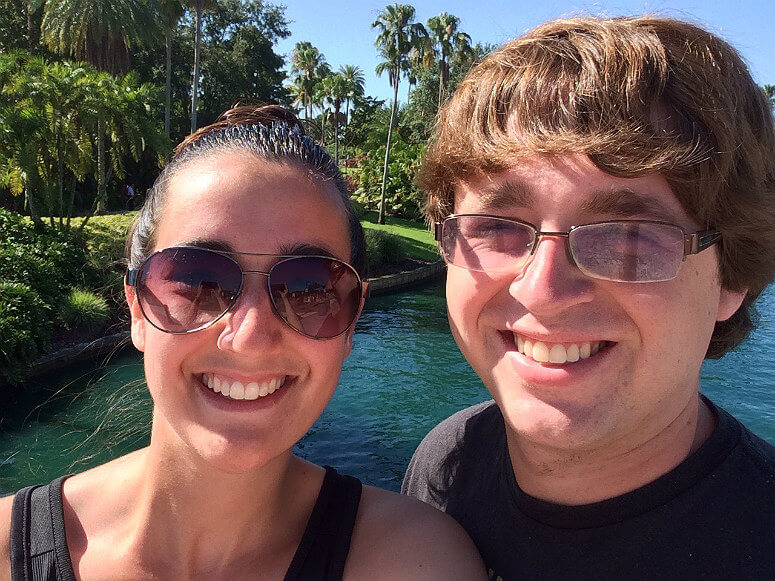 We considered upgrading our pass to visit Universal Resort, which has the Diagon Alley section of The Wizarding World of Harry Potter. Neither of us have been there since they added that to the park, but I think that it’s dumb that you have to visit both parks (and pay for both parks) to experience all of the Wizarding World. We ended up deciding against it because we were both hot and tired and didn’t want to pay the extra money (considering my current unemployment, haha).

Later on in the week, we went go-karting and played mini golf. But other than that, we just hung out by the beach and the pool. I was really bummed to leave Saturday morning, but Andrew and I got up early to watch the sunrise and that made it worth it. So I’ll just leave you with this.

When I was very young, perhaps four or five, I remember my dad waking me before the sun was even up. He scooped me in his arms, blankets and all, and carried me to our family van. Strapping on my seatbelt, I settled in and rubbed my groggy eyes. My brothers and sister scrambled in after me.

My mother said a prayer before we began, and then we were on our way.

This wasn’t an unusual occurrence. At least three times a year, for as long as I can remember, my family would pack up the van and head out on our next road trip.

Most of the time, it was either to visit my grandparents and dad’s side of the family in Pennsylvania, who live about a 12 hour drive away; or to vacation in Florida where my parent’s own a timeshare, which is about a 17 hour drive.

In fact, road trips are good for my heart. Back out onto the road, with nothing planned for the next day except to get passed the next exit. I would always bring stacks of books with me and plenty of crayons to color with in my coloring books to keep me busy. My brothers would bring DVDs so they could watch on my dad’s laptop and my sister was content with just her music. But the best part is not having to do anything.

There was one particularly bad trip to my grandparent’s house one year during Christmastime. It had snowed so much (I think at least a foot, but probably more) that almost all of the exits were closed. My parents were tired and it was near 10 p.m. but we hadn’t eaten dinner yet due to the snow. There had been so much traffic that we watched all three Lord of the Rings movies – extended editions, mind you – just in the state of Ohio.

Note: Ohio does not normally take 12 hours to drive through.

We finally found an open exit and my dad pulled off. We turned into the first restaurant and just as my mom walked up to the door, the manager changed to sign from open to closed. My mother was furious and we were all crabby, but we finally managed to find an open Steak ‘n Shake. My two brothers were constantly teasing and picking on me as we ordered and waited for our food. I remember that I ordered chicken fingers and fries. My brother said one more mean comment and I snapped; I took a chunk of my chicken tender, dipped it in ketchup, and then shoved it in my brother’s face and smeared it all over.

In my head, I didn’t expect him to retaliate so fast.

He was shoving his food in my face as well and my mother was screaming at us both. My other brother was cackling in glee, while my dad and sister were oblivious to the whole debacle, absorbed in their own conversation at the other end of the table.

We both were grounded.

But even these memories we laugh about now. (I still take the stance that my brother deserved it.)

On Friday night, just like the old days, my family prepared for a road trip. There are some differences today. My parents no longer own a purple van so we took two separate cars instead. My eldest brother didn’t join us for this trip, but our family expanded last year, so Andrew was joining us for the first time.

Despite all of these differences, some things never change. Vacation in the Gray family remains the same: Daytona Beach, Florida.