This weekend my older sister graduated from college. She went to Grace College in Indiana, so it was a six-and-a-half hour drive from where we live in Missouri. I find a lot of people really don’t like long car rides, and I concede that I get a bit stiff and just want to move around some, but other than that, I love road trips. I think it might be due to the fact that I’ve been on them so much as a kid.

Most of my dad’s side of the family lives in Pennsylvania, but we also have some family in Indiana as well. So, every Christmas we go up to my grandparents in Pennsylvania, which is a twelve hour drive, and then every Easter we go to my aunt’s in Indiana, a six hour drive. Oh, and I can’t forget that most years we vacation in Daytona Beach, Florida, which is an eighteen hour drive. It’s hard to forget being cooped up in a van for eighteen hours with people I already spend too much time with at home. It’s fun, really (/sarcasm). Needless to say, I just kind of get used it to, and I guess just learned to enjoy it.

Speaking of my grandparents, we’re headed up there in two weeks to visit my grandpap. I don’t think I’ve talked about him much in this blog, but I did a lot on my other site. He has Alzheimer’s and has had it for about four years now. In the beginning stages, it wasn’t bad, he just would forget to take his medicine, or forgot that he already went to the store and got milk, but it quickly became much, much worse.

The last time we visited in August, he didn’t know our names. We think he knew we were familiar, but he kept calling my mom and dad my other aunt and uncle. Then he was in a nursing home, which was best for him, but my grandma is pretty stubborn, and somehow got him to come back home. He doesn’t do much but sleep. Someone comes once a week to bathe him, but sometimes he forgets even where he is supposed to go to the bathroom.

He’s become very mean and vile, and says stuff that he’d be mortified if he said four years ago. He’s just slowly deteriorating and we really don’t know how much longer he’ll last.

I was never super close with my grandpap, mostly because of the distance barrier, but I still love him and have lots of great memories with him. I am going to miss him when he does go.

I think I wandered off topic. We went up to see my sister graduate from college, and it was as fun as graduations can be (as in, not at all). She graduated with a degree in Business and Marketing, and is more than happy to be done with school. If only I was done. Only five more years… 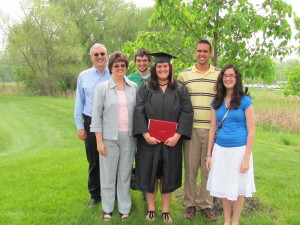 Andrew let me borrow his iPod Touch thankfully though, so I was able to entertain myself somewhat while I was there. I was also able to use it to get on my website and return some comments, though I kept making typos since I wasn’t used to the touch screen.

Tabor, my dog, stayed with my aunt Jan (I have a ton of aunts, don’t I?), and was a right baby like he usually is. The first night he just stayed in one spot and shook, and pooped. He slept with my aunt that night though, and I think that calmed him down. When we got home today, he would not calm down. He was hopping all over the car, and I have a million little scratches on my feet now from his claws. Little brat. But I missed him. :love:

Happy Mother’s day to all you mom’s out there! <3 You all are amazing and do so much for your children without getting half the credit that you guys deserve. So enjoy all the flowers that you’re going to be showered with.

I just want to talk about my mom for a second. She is one of the most amazing, inspiring, and strong woman I know. I know that this comes from a bit of a biased point of view, because she is my mom and all, but she really is great. She came from a not so pleasant family life when she was young, and she paid for her own business school and has had to work hard for everything she wanted. She’s been a stay at home mom most of her life and cleans houses as a part time job; it’s a crummy job, but she does it so she can help provide for us. I think I’ve only seen her cry a few times in my entire life, and she exhibits Christ-like attitudes in all that she does. She’s not perfect, but she’s one of the best role-models I could ask for. <3

She’s always been there for me as a friend, but she’s also been my parent, which can be a hard thing to do. You want your kids to be happy, but in the long run, you have to lay down the rules and do some things that make them temporarily unhappy, but it builds them and prepares them to be independent. And my mom has done that for me. I often whine and complain that she’s so strict, but I’ve learned to appreciate it because those rules helped me shape me to who I am today. I didn’t realize it then, but I do now.

We’re having my grandpa and aunt over for lunch and my dad’s BBQing. I just got done helping my mom prepare all the other sides: fruit salad, baked beans, baked potato salad, strawberries, deviled eggs, and more. We’re having quite the shin-dig.

It’s just going to be an overall nice day with my family and with my mom. We don’t give her half the credit that she really deserves. I hope you can spend the day with your mother as well and just show her how much you appreciate her. :love: