Saturday was my senior Prom, and it was a complete blast. I had tons of fun and it wasn’t even comparable to last year, which was an absolute disaster. It was almost absolutely perfect.

The only real hitch in my day was my hair. In case you don’t know, I have curly, frizzy, and obnoxious hair. Some days it will be really pretty, others it looks like I just rolled out of bed no matter what I try and do with it. Last year I had straightened my hair, but I wanted to do something a little more special with it this year, so I went somewhere to get it done. My aunt’s sister always cuts my hair, so I naturally just went to her to get it done.

I had wanted my hair curly and side swept with part of it pinned back, like this picture. However, she didn’t do it like the picture at all. She basically put my hair in a side ponytail and it was not curly. It just looked a mess. I didn’t want to offend her or my mom, so I went along with it. I mean, she was completely finished so there was nothing that I could do about it. On the ride back home, I was trying not to cry but my mom could tell that I didn’t like it and I just burst into tears.

Thank goodness my sister Rachel came to the rescue.

My stylist had put so much hairspray in my hair that she had to literally pry it apart, but she made it look so much better than before. It still wasn’t what I originally wanted, but I wasn’t going to complain.

I went with a relatively small group of friends and pictures were so fun!

We went to a park towards downtown and took pictures there, so the scenery was really pretty. And it was such a sunny day – so the pictures came out really well!

The night passed by really fast, too! The dance started at 7:oo PM and the next time I looked at the clock it was 10:00 PM. The dance floor was the perfect size, too. I remember last year it was really, really small – so small that everyone couldn’t fit on it. This year, it was a little bit larger, but not so much that we were all dwarfed.

And they had a chocolate fountain. :* Nom nom nom!

I was a little worried that the friend I had that basically said she didn’t want to be friends anymore would ruin the night with drama. But even though this girl came to take pictures with us (which was a little awkward), she avoided us like the plague for the rest of the night so it didn’t affect my prom night at all. Thank goodness! I’m over the situation and I really hate drama.

She didn’t end up winning queen, but it was still really fun to root and shout for her.

After the dance, Andrew, Becky, and I went to McDonald’s – where Andrew works – because his manager wanted to see him. Andrew’s a I’m-going-to-wear-shorts-year-round kind of guy, so seeing him so dressed up is kind of a big deal.

It was so funny, his manager said, “Oh Andrew! You look so dapper!” He replied, “What’s dapper mean?” Hahaha.

We met back up with the rest of our group at Applebee’s and then I had a girls only after-sleepover. (Get it? Like after-party, only after-sleepover! :3 Ah, nevermind.) My sister just recently moved out, so we pulled out the sleeping bags and slept on the floor in her vacant room. We stayed up til around 3:00 AM just talking. Ya know, what girls do best.

Overall, it was just a wonderful, beautiful night. It was fun to get all dressed up and see everyone else looking so gorgeous! 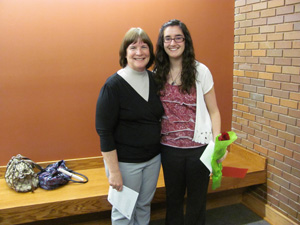 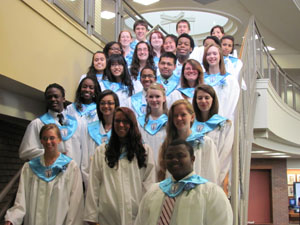