My grandpa has been really kind of depressed lately. We think it’s just because he’s lonely and doesn’t have a lot to do. He works at the local Bingo in the concession stand and at the VFW, but other than that, he doesn’t really have a lot going on. I can’t blame him though for being a little down; if most of my friends and family my age had passed away, I’d be feeling a little blue too.

I feel really bad. I love my grandpa dearly, but we all have hectic lives and can’t always manage to spare time for him. He usually comes over about once a week, but that’s about it. So, I offered the idea up of getting him a puppy. When Tabor (my dog) was a puppy, he adored him. Tabor would follow him around and my grandpa would exclaim, “My little buddy is following me around!” It was really cute. He still shows affection for Tabor now that he’s grown, so I thought he might really enjoy having a dog around to give him a little more company.It would give him something to do as well; taking care of a dog can be a lot of work.

We’re still discussing it because we’re not really sure if he would want one or not, and we don’t want to just get him one and then find he doesn’t want it or only accepted it because he was pushed into it. My grandpa can be cranky and negative (it must just come with age :P) at times, so it’s all kind of up in the air.

Not gonna lie, I would probably go over to my grandpa’s a ton if he got a puppy. I mean, look at these adorable faces from our local Stray Rescue: 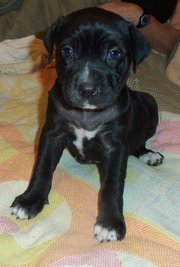 How can you not fall in love? :love: